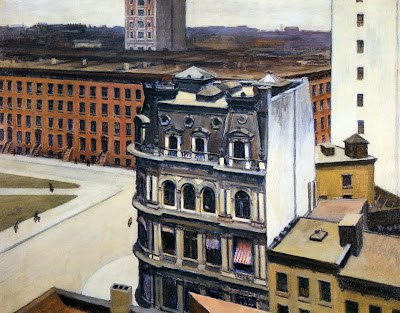 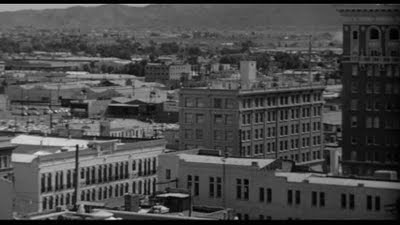 Psycho's opening montage of Phoenix, Arizona, suggests that, like the Hopper painting above, behind these blank, silent walls and windows, a myriad lives are being played out.

As I've shown in recent blog posts, Edward Hopper's influence on Alfred Hitchcock's films almost can't be overstated. While the director mentioned the artist in passing, it's with his 1960 masterpiece Psycho that the director and his screenwriter, Joseph Stefano, went into more detail about the matter. For instance, did you know that the Bates Mansion is based on one of Hopper's works? 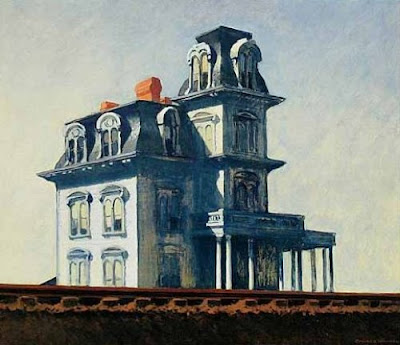 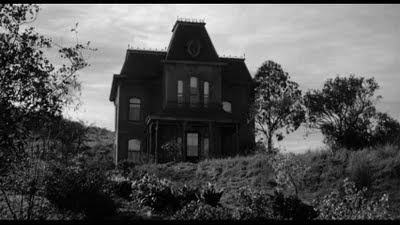 Biographer Gail Levin revealed that Hopper and his wife, Jo, “were delighted to learn that Hitchcock credited the idea for the house in his film Psycho to looking at House by the Railroad.” The obvious architectural similarities are easy to spot. But so what? Clearly, Hitchcock saw more than just that in the painting.

Hopper's Victorian house is skinny, awkward, self-conscious, not quite comfortable in its own skin. Ashamed of its nakedness in this barren landscape. While the painting was a model for the Bates house, maybe it also reflects Norman's own state of mind. As evidenced by the railroad tracks running in front of it, it's also been left behind by progress, just as the Bates estate has been bypassed by the new Interstate highway, which Marion Crane turned off of on that fateful rainy night. (Check out my very first Alfred Hitchcock Geek post, which elaborates on that subject.)

But the affinities run deeper. Remembers Psycho screenwriter Joseph Stefano, “I told [Anthony Perkins] that I felt that Norman Bates, if he were a painting, would be painted by Hopper, and he agreed. So we had that kind of discussion, writer and actor, about the character. He had an incredible grasp on Norman Bates and the situation that he was in. I think Tony Perkins must have known what it was like to be trapped.” Loneliness. Entrapment. Common themes in Hopper's works.

It's impossible to say which paintings they discussed specifically, but let's take a look at a few and see what they suggest—and how these images might have left incriminating fingerprints on the movie.

"You know what I think? I think that we're all in our private traps, clamped in them, and none of us can ever get out. We scratch and we claw, but only at the air, only at each other, and for all of it, we never budge an inch."—Norman Bates


When Hopper included people in his paintings, they are almost always alone in their "private traps." 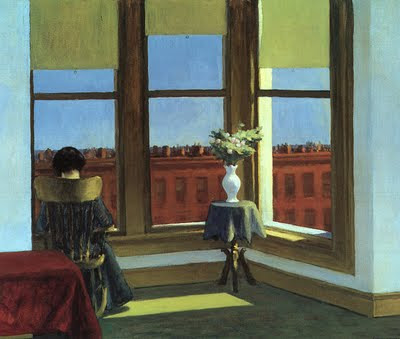 Room in Brooklyn (1932). Excuse me, but am I the only person here who thinks that the image of Mrs. Bates, alone in her rocking chair, sitting in a window of the Bates Mansion, might owe some of its mood to Room in Brooklyn? The ennui of the scene evokes Norman's own boredom, as a man isolated, solitary and trapped in a world not of his choosing, looking out on a maddeningly unchanging landscape. 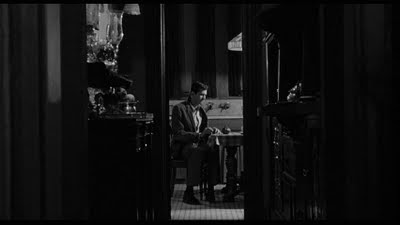 In this shot, we are allowed to peer in on Norman, to see him alone in his house. The claustrophobic framing and apprehensive aloneness could have been inspired by just about any painting by Hopper.

Other scenes in Psycho strike me as Hopperesque. 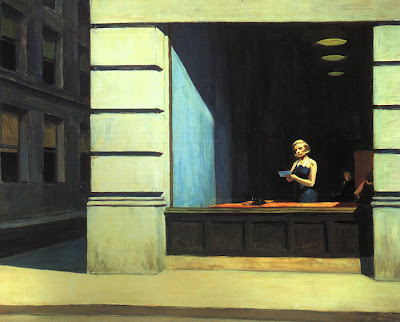 Our eyes are drawn to the letter the woman holds in New York Office (1962). Could Hopper have been inspired by scenes in which Marion contemplates the $40,000? 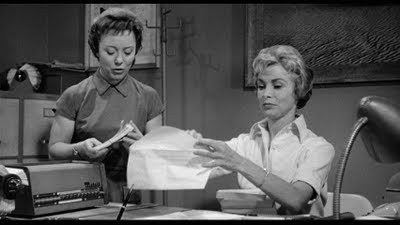 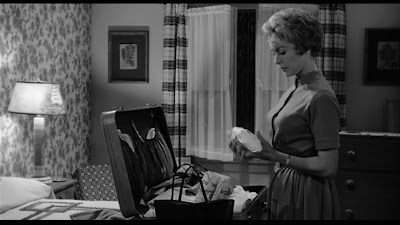 Unpacking at the Bates Motel.

Another very important area where Hitch and Hopper are alike is with regard to how they treat voyeurism. (Take a look at my November 14 post for a comparison of Hopper’s part in Hitch's voyeurs’ manifesto, Rear Window.) As the director told Francois Truffaut about the opening scene of Psycho, it “allows the viewer to become a Peeping Tom.” Any viewer who stops to gaze at a Hopper is implicated in the act of peeping as well. The same can be said of a Hitchcock movie. We become secret sharers with those artists, who provide images for out mutual, prurient satisfaction. 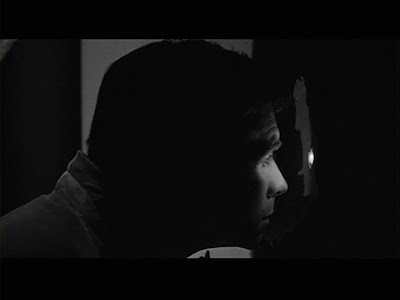 Norman pulls aside a print of The Rape of Lucretia to take a gander at Marion (bird pun intended).

We are complicit with Norman in the act of peeping. How so? In this scene, we know that Marion is taking her clothes off. Our first reaction to Norman when we see him pull aside the picture is to chide him for being so naughty. Our second response is to wish he would move so we can see what he’s seeing. Hitch obliges us with this subjective shot: 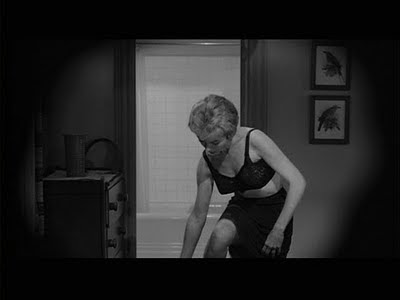 Another aspect of Hopper’s paintings, not often talked about, is the air of expectancy. His figures aren’t as much posed, as they are poised. He captures them in the moment between ennui and action. This, I feel, is what makes them so compelling and dramatic. We are drawn in because his paintings are so full of potential energy. 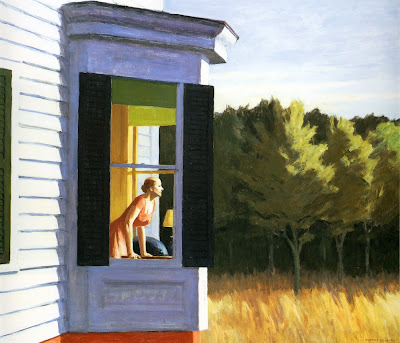 Hopper's painting makes me think of Norman looking up from his reading to see a car -- will it turn in to his driveway or keep going?


For more examples of Hopper's influence on Hitch, follow these links:Edward Hopper and Rear Window.
Edward Hopper and Shadow of a Doubt.For posts about Hitchcock and other artists, check out my Greatest Hits page.

Anonymous said…
Yeah! Great post! I only watched The Coen Brothers Barton Fink for the first time the other day and felt, the whole colour schemes and use of lighting evoked Hopper too so its strange to see this influence again here.
November 24, 2009 at 8:21 AM

Maya said…
Wonderful post. I knew Hitchcock had used the House by the Railroad, but I never thought about all of the other connections you made. Great comparative stills. Excellent insight.
December 11, 2009 at 11:12 AM

Thanks for noticing! BTW, did you know you're not too far from Hitchcock's house? He and Alma lived not far from Santa Cruz.
December 11, 2009 at 11:19 AM

Anonymous said…
Thanks for your insights. I was trying to identify the paintings in the film and came across your remarkable piece. Thx, from CVG
November 13, 2010 at 7:37 PM

Anonymous said…
I'm rather late to the party, but I wanted tell you I very much enjoyed your very excellent and informative post. I'd not heard of Edward Hopper until tonight, when Turner Classic Films' programming theme was "Edward Hopper on Film."
Hmmm, I wonder where they got the idea?
January 11, 2017 at 8:58 PM